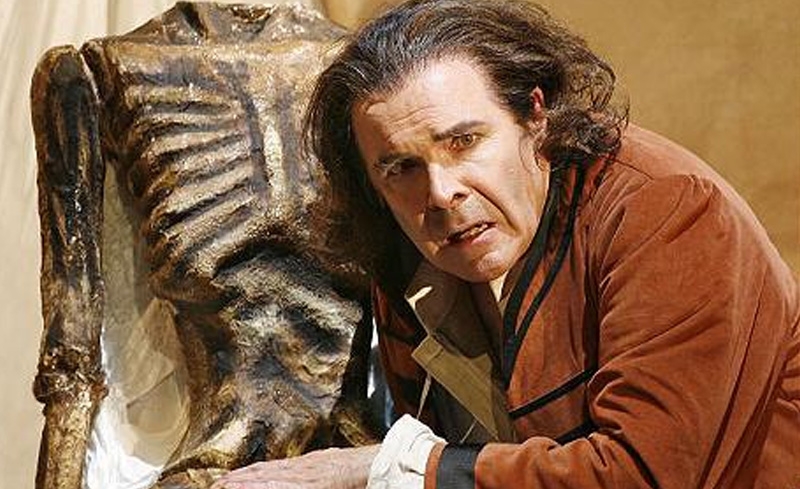 The baritone Richard Salter, who has died aged 65, only appeared once on the British operatic stage - in 1986, as Chorebus in The Trojans at Opera North.

Yet he was famous in Germany, made Bayerischer Kammersänger in 1994, and was the baritone of choice throughout the German-speaking world for contemporary opera. He was the first Lenz in Wolfgang Rihm's Jakob Lenz at Hamburg State Opera and starred in Rihm's Die Eroberung von Mexiko, Manfred Trojahn's Enrico, Aribert Reimann's Das Schloss (he was K) and Jörg Widmann's Das Gesicht im Spiegel - the latter two at the Munich Opera Festival. Salter died in Karlsruhe, the day before starting rehearsals for Britten's Death in Venice. He had been cast as Kepler in Philip Glass's new opera about the astronomer, opening next autumn in Linz and at the Brooklyn Academy.

Last summer Tim Ashley wrote in the Guardian of Salter's "astonishing performance as the Magistrate" in Erfurt Opera's concert performance of Waiting for the Barbarians by Glass at the Barbican. Salter's gift in the modern repertoire was to make the music he was singing seem entirely natural and not at all arduous, which allowed the public to relax and enjoy new works. He was widely respected as a singer of quality, who served with distinction virtually all the roles in the classical baritone repertoire, Italian, French, and Russian too - except that he sang these parts in faultless German. In Darmstadt, Kiel, Bremen, and at the Munich Gärtnerplatztheater, vernacular was the rule, as at ENO.

Salter guested at the Deutsche Oper Berlin, and in Brussels, Cologne, Düsseldorf, Frankfurt, Paris and Vienna. He played Falstaff and Gianni Schicchi. Other parts included Pizarro, Germont, Wozzeck, Dr Schön in Lulu, Escamillo, Belcore, Tonio, Sharpless, Fra Melitone, Renato, Posa, Luna, Onegin, Don Giovanni, Almaviva, Papageno, Figaro, Dandini, Kaspar and Wolfram. He sang at countless festivals, and his Carnegie Hall debut in 1999 was in Bernd Alois Zimmermann's Requiem for a Young Poet. Work kept coming. At Christmas he wrote to friends: "The week after my 65th birthday I caught a foul cold and lost my voice - to the enormous relief of family, friends, students etc. On my most voiceless day an agent called to book me to do Death in Venice. Genuine retirement is not on the cards."

So why did he only perform once on stage in Britain? Brian Kay, a fellow member of the King's Singers, thinks it a serious indictment of our approach to music and theatre. In Germany a repertoire system serves both audience and performers on a scale and at a price never contemplated in the English-speaking world. For 35 years from his arrival in Darmstadt in 1971 Salter was a member of an ensemble. He did not have to look for work, though it increasingly came looking for him. He would have liked to have worked in Britain, as he said after a wonderful 1988 performance as Beckmesser at the Palais Garnier in Paris in a production of Meistersinger by Herbert Wernicke borrowed from Hamburg. But British opera and theatre don't do salaried pensionable ensembles.

Salter was born in Hindhead, Surrey. After Exeter Cathedral choir and Brighton college, he won a choral scholarship to King's College, Cambridge, in 1962 and was thus in the crop that turned themselves into the King's Singers. He sang in the group's May 1968 debut concert. But then the Richard Tauber prize took him to Vienna to study with Anton Dermota, and in 1970 he was a private student of Ettore Campogalliani in Mantua before a season in the Glyndebourne chorus.

David Willcocks at King's had stung Salter with a disparaging remark into taking his singing extremely seriously. The result, according to fellow King's Singer Simon Carrington, was that he hid himself away and honed his vocal technique. Alastair Hume remembers that "he developed this extraordinary barrel chest and phenomenal breath control, and could sustain a line for ever: a very dramatic, expressive and communicative singer. What he did was really thrilling." Salter also acquired a reputation as a fantastically quick studier. Later in his career he was phoned one morning by an opera intendant to do a role the following day, at a concert performance of a tough atonal modern opera where the baritone had dropped out. He was on holiday, but the fee was persuasive. The intendant met him at the station that evening when he arrived, and handed him the score; next morning at rehearsal he was note perfect. After the performance the conductor took him aside and said: "You know, you sang your aria a tone too high ... But don't worry - Herr Fischer-Dieskau always sang it a third up."

Robert Tear, who was alongside Salter in The Adventures of Mr Broucek at the Bayerische Staatsoper in Munich during the Peter Jonas era there confessed: "When I met up again with him I was quite shocked because I did not expect him to be anything like as good as that." Colleagues such as Celia Jeffreys, who knew him at the RCM and then met him again when she joined the Darmstadt ensemble, remark on his extraordinary humility. "He was so humble about what he did, though he stood out in his ability with the modern repertory. He somehow was embarrassed by praise. His premiere as Rigoletto in Munich was wonderful. Everything he did he mastered."

Salter was a notorious prankster with a wicked sense of humour. He used to suggest he was too casual to have survived in the King's Singers, which was why he gravitated to contemporary music "where one wouldn't need to sing in tune ..." He taught voice to students of "musicals" at the August Everding Theatre Academy in Munich. Jeffreys remembers coming out of her practice room next door to his and finding a young lad who had been working with him sitting on the window sill. "How's your new student?" she asked. "Well, he hasn't jumped yet," Salter replied, quick as a flash. In the canteen a few months earlier, he giggled as he read out one of his reviews: "It says 'he was already a legend in his lifetime'."

He is survived by his wife Deirdre, his son, Thomas, and his daughters, Katherine and Eleanor.