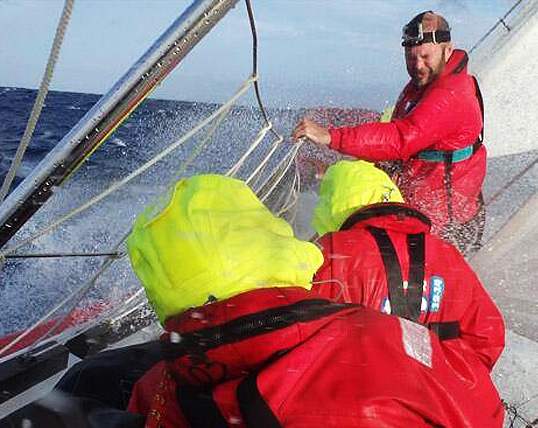 Ollie Phillips is currently enjoying sailing with Team GB in the Clipper Race 2013/14. The OB office managed to catch up with him in Cape Town, where Team GB were celebrating securing first place in Race 3 of this round the world race. Ollie also found the time in Cape Town to show his support for the Stellenbosch Academy of Sport where he met up with the Springbok Sevens national team as part of his global 'Road to Rio' campaign ahead of the sport's debut in the 2016 Olympic Games.

The former England 7s Captain and world player of the year Ollie Phillips returned to the England Sevens ranks in the summer of 2012 after two seasons with Stade Francais in Paris - playing in the 2010 European Challenge Cup final - and following injury moved for a brief spell with Gloucester at the end of the 2011-12 campaign . The Brighton-born centre and wing was a Newcastle Falcons player when he made his England debut and between 2004 and 2009 appeared in 17 World Series tournaments, Captaining the side in 2008-09 when they clinched a first Wellington Sevens title and followed that by winning the London crown.

Ollie has taken a year off his professional rugby career to sail with Team GB in the Clipper Race. A round the globe race, the organisers supply the fleet of 12 identical, 70-foot, stripped down racing yachts - each sponsored by a city, a region or a country - and man each with a fully-qualified skipper, employed to lead the crews safely around the globe. Race 4 Cape Town to Australia starts today, Monday 4th November. We are looking forward to watching their progress!

The twelve-strong fleet will leave the V&A Waterfront at 1130 local time to perform a Parade of Sail in front of Table Mountain ahead of Race Start at 1430.
Race 4 sees the fleet take on the Southern Ocean as they head for Albany, Western Australia. You can keep up to date with the day's action on the Clipper Race twitter feed. The Clipper Race fleet is expected to arrive in Albany from approx. 24 November.

I'm not sure I had a specific target. I loved my sport and school offered me the perfect platform to exploit that love and passion to the maximum. I guess rugby was a major focus for me, even back then and what I am doing now is exactly what I would've wanted to do as a young lad (rugby that is, not being a sailor!!!)

Apart from still being a child at heart, I am now a professional rugby player that has taken a year out from the sport to sail around the world.

There are so many as I enjoyed every moment at Brighton College, but I think the variety that school offered me was the best thing about it. Not just in sport, but also CCF, art, music, theatre, the list was pretty extensive. It allowed me to discover so many different aspects of life that I hadn't really considered before. That and the fact that it was my first introduction to girls.....variety!

Do what you love doing. If you have passion for something then your enthusiasm will never wain and you will invariably be good at it.

Get beaten up by men who are bigger, stronger and quicker than me!

The ability to consistently perform and be at your peak. International sport is an unforgiving arena and you have to make sure that every facet and detail of your trade is well managed and looked after on a day by day basis. 'Relaxing' or days off don't really happen as things like your diet have to be constantly monitored and managed.

Captaining my country was a major highlight and being named IRB Sevens World Player of the year in 2009 was a huge milestone in my career.

Being nearer to my family. With rugby you are constantly travelling and so you don't get to spend as much time as you would like with you loved ones.

As someone that was always kind, funny, giving and approachable