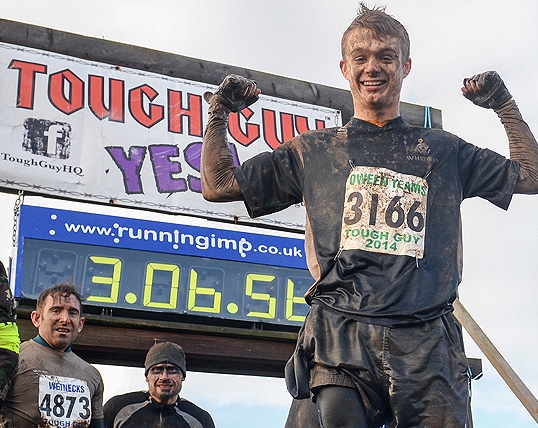 I travelled up to Tough Guy in Wolverhampton on Saturday 26th January with Jess and Mum, and two of my school mates, Yiannos and Conrad who were also doing the run. Dad (Joey Appleton (D. 1979-84)) bottled out as he was still in plaster recovering from ankle ligament surgery. Some excuse! We woke up on the Sunday morning to be greeted by the great British winter weather, high winds and pouring rain. Just what we wanted! Our bravado from the previous weeks now turned to apprehension as the race time grew ever nearer.

When we arrived at the Tough Guy site, it was pretty chaotic. The car park was very muddy and cars were getting stuck and sliding about everywhere. Someone even decided it was a good idea to bring their Porsche, which would have definitely had to be pulled out by the waiting tractor at the end!

There were thousands of people registering and it looked like we were the youngest. Many of the competitors were dressed for the occasion, Zombie’s, Sunflower’s and Bunny Girls to name just a few.

We lined up at the start and were welcomed by a large slope, which was so steep we had to slide down on our bums along with the other competitors. This was probably the only fun thing on the course! The course was filled with plenty of water, slopes, cargo netting, ropes, A-frames, tunnels and an underground interrogation center filled with dangling electrical wires with a small 10,000 volt current flowing through them. Madness what had I let myself in for?

Different stages of the course provided more new challenges; the hardest part of the course I found was a 300m neck high ride through ice cold water, with the sound of other struggling competitors and the sub-aqua diving squad jumping in to save the people around you, who were too hypothermic to carry on. Most being rescued from the water after collapsing from muscle fatigue. Other parts of the course such as the “underground interrogation chamber” were also a massive struggle. On this occasion I had to enter a sub-terrain cabin in complete darkness that had plenty of electrical wires dangling from the ceiling. The chamber also knee high muddy water that you had to slowly drag yourself through. As I approached the end of the cavern there was a viewing tunnel in the roof where a photographer was clicking away. I lost concentration as to where I was heading and as I gave him the thumbs up for my picture I touched one of the wires. The shock wave from these wires were so powerful I thought at first I had been punched when I got touched on my neck. Alas my mistake; it then threw me into a bunch of other brutal wires. I was dazed after this for several minutes.

On completing one of the many A-Frames we had to cross a stretch of icy water again. To help on several of these stretches of water, two wires were suspended over the water, however on one of the lines I had the misfortune of having a six footer plus come after me. I was left dangling from the top wire as he joined too soon after me and declined my polite request for him to go back. End result I am in the water again!

As we approached the finishing line in my hypothermic condition we found to our horror even more water to wade through, followed by a large hill that we had to run up, slide down the other side and then up again to finish Tough Guy. Until now we had managed to stay together to help each other and keep each other going, Conrad was the first to throw himself into the water shortly followed by Yiannos and myself. However it came apparent that Yiannos developed cramp half way through the wade and pulled himself out onto the side and stretching his leg in agony, me and Conrad then finished the wade and looked back when we got clear of the bone-chilling water for the last time to see Yiannos in the distance with the medics attending him. Conrad set off for the finish and I followed shortly after when we noticed Yiannos plodding on once more into the breach. Conrad was first over the line and Yiannos limped to the line about 2 minutes after me. We all cheered as we were once again reunited immensely proud of our achievement.

Crossing the finishing line I came 947 in a time of 3 hours 5 minutes. (Around 6000 people took part but only 2227 managed to finish. Out of the junior competitors (17-20 years old) I came 47th; which for me was a huge personal achievement. I consider myself lucky to have finished the race as during Tough Guy I witness many injuries including one person with a dislocated shoulder as he fell off an A-frame and many including myself suffering from hypothermia and muscle exhaustion.

May I take this opportunity to thank personally all the people who sponsored me and the "Lizzy Bremer charity for Neuroblastoma" I was amazed at your generosity and smashed my target of £300 to raise currently £1500. Alex Bremer (R. 1979-83), Miriam and George have been overwhelmed with your help and concern for this rare child cancer and I am glad to have done my little bit to raise money to help.

You can still sponsor me if you have not done so already by following the link: www.justgiving.com/Luke-Appleton

After the challenge of Tough Guy I am mentally wiser and stronger, and if I am mad enough to choose to do it again, then I assure you that next time I will be more prepared, as I underestimated what I let myself in for!

However I am now proud to say I am a Tough Guy with a medal and chest to pin it on.