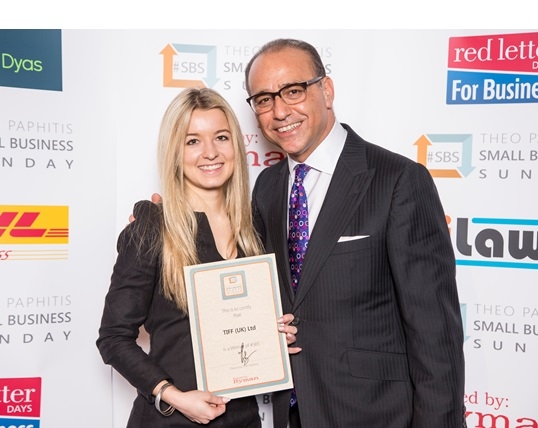 The year after leaving Brighton College in 2011, during her gap year, Tiffany set up an online platform for eco-conscious products called TIFF (Trendsetting, Innovative, Fair, Fashion) tiff.uk.com. They launched with 11 brands and nearly 2 years on work with 60. Tiffany runs TIFF alongside studying Fashion Business at Istituto Marangoni (where half of Dolce & Gabbana went).

Last week TIFF was awarded a Small Business Award by businessman and TV personality Theo Paphitis - a great achievement for such a young business.

Last week, Tiffany tweeted Theo about her business during 'Small Business Sunday', an initiative set up by Theo that runs weekly.

Theo re‐tweeted Tiffany's message to his 454,000 followers and as a result, the business (www.tiff.uk.com) gained 250+ more followers that following week alone, a dramatic rise in traffic, new subscribers and has had an increase of interest from ethical brands in addition to the 60 she already works with. They are also profiled on a new website that is exclusive to Small Business Sunday winners.

Tiffany said, "For such a young company I am delighted that we have had a boost from someone of such caliber. As anyone with a young company knows, exposure is a hard part and Theo has helped raise our profile. I am only 21years old myself so to be recognized by Theo is so fabulous!'.

Anyone looking for a re‐tweet from Theo should tweet him about their business on Sunday between 5 PM and 7.30 PM and include the hashtag #SBS. Six lucky businesses are re‐ tweeted every Monday at 8 PM and then invited to enter their profile on the new  website. This is done free of charge and the new website is sponsored by Ryman Stationery, where Theo is Chairman.