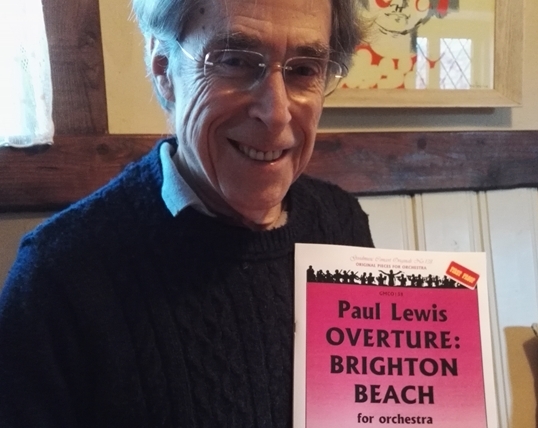 Paul was born into a family of musicians, reluctantly learning to play the piano before deciding on a career as a composer at age twelve. At nineteen his orchestral pieces were recorded as production library music, and at twenty he became Assistant Musical Adviser to ABC Television and composed his first score for a major TV drama. Paul began composing this piece while still a pupil at the College over fifty years ago! Completed just before Christmas, Paul then undertook the arduous task of proof-reading the 63 pages. He has now donated the piece to the College for the pupils to perform and rehearsals are underway!

I am thrilled to have been commissioned by the College to celebrate the splendid new Music School with an overture for the College Symphony Orchestra. This has finally brought to an end the longest gestation period of my composing career, for it was in my last term at the College in 1959, shortly before my 16th birthday, that I began my "Overture: Brighton Beach". The theme tune of the piece has nibbled at my brain intermittently ever since, and I have several times toyed with it in between the pressing deadlines that a busy life composing scores for TV and film perpetually thrust upon me. Now at last I have finished it!

The work is however a totally new composition; all that remain of the original piece are the theme tune and the idea of a middle section in which the orchestra mimics a military band playing the stirring old march song "Sussex by the Sea", long considered the unofficial county anthem of Sussex.

The overture is therefore an evocation of Brighton seaside in the 1950s, pre-Mods and Rockers riots of the '60s and certainly pre-Kemp Town nudist beach! It was a comparatively innocent world of post-war gaiety: of seaside landladies, candy-floss-eating day trippers, Punch and Judy, beauty contests and paddle steamer trips from the piers. A military band puts in an appearance, as does the giant fairground organ that was stationed at Peter's Playground. Finally a fanfare blazes out the name of Brighton College, making prominent use of the notes B and C of course, and the overture ends with a hearty festive flourish.

Composing the work filled me with a sense of pride in all that the College Music Department has achieved under the leadership of Sandy Chenery the Director of Music. In a busy year of professional engagements, recordings and premieres, the first performance of "Brighton Beach" by the Brighton College Symphony Orchestra under Sandy Chenery will I know not only be the brightest highlight but the one closest to my heart.