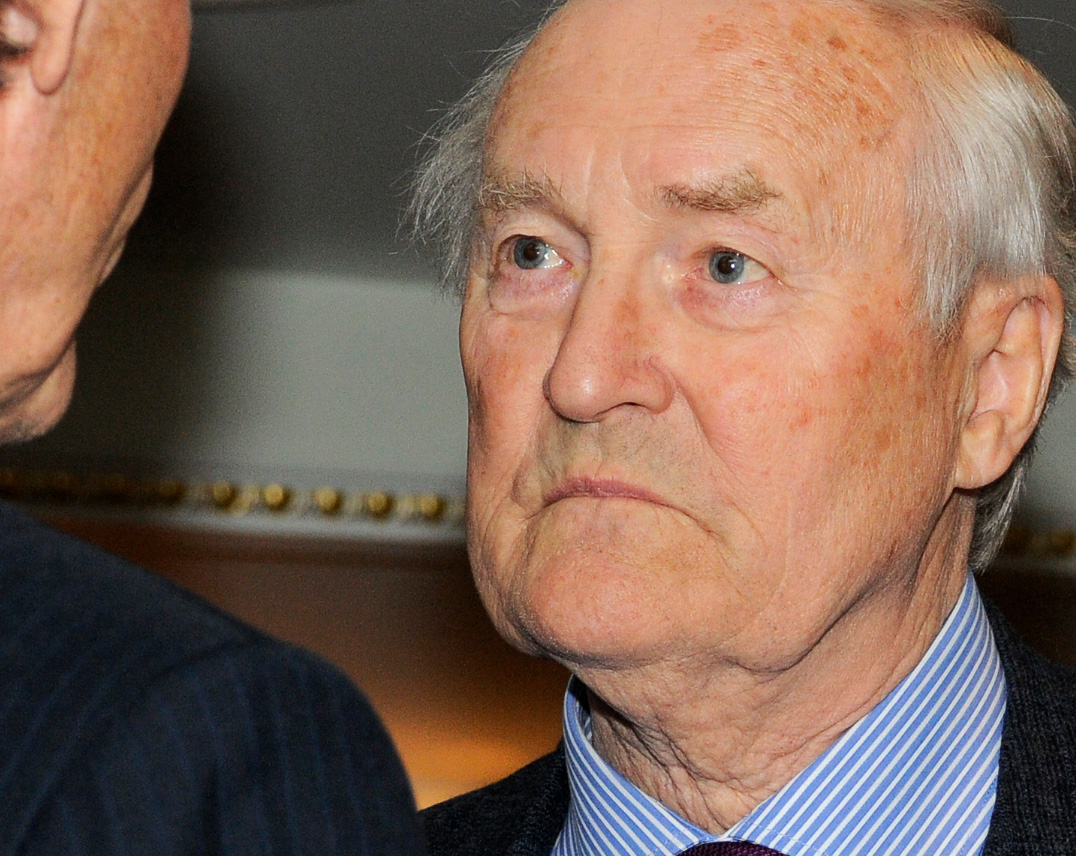 Colin informed us earlier in the week and sent us the following notes to share with the OB community.

There will be a private funeral with only family flowers, but a memorial service will be held in London later in the year. Messages of condolence can be sent to the OB office and we will pass them on to the family. Our thoughts are with the family at this difficult time.

Clive Nicholls QC died aged 84 on Thursday 9 February. He had fallen at his home and broken his hip some thee weeks earlier. Surgery to repair the hip initially seemed to have been successful, but complications set in, and he gradually slipped away. He died surrounded by his family, to whom he was devoted. Until his fall, he had been his usual dynamic and indefatigable self.

Clive and his identical twin brother Colin were called to the Bar in 1957. They both graduated at Trinity College, Dublin and both became leading lights in their respective fields after joining Chambers situated, formerly, at Queen Elizabeth Building in Middle Temple, and, latterly, at 3 Raymond Buildings in Gray’s Inn. Clive became head of Chambers in 1994, and served in this position until 2010. Both Colin and Clive took silk (in 1980 and 1981 respectively), both sat as Recorders of the Crown Court between 1984 and 1999, and both became Benchers of Gray’s Inn (in 1989 and 1990 respectively.) Both continued to be active in advisory and academic work after their 80th birthday, and each remained (and, in Colin’s case, remains) a welcome and valued member of Chambers.

Clive’s was a stellar, glittering career. He specialised in extradition, and the roll-call of cases in which he appeared speaks for itself. The pinnacle of his career was the case of Chile’s former head of state, Senator Augusto Pinochet, which involved no fewer than three appeals to the House of Lords. He appeared in courts all over the world, and was internationally acknowledged as a leader in his field. He was the lead author of “The Law of Extradition and Mutual Assistance” (Oxford University Press), now in its third edition.

While he achieved real distinction in his career, Clive will be remembered for more than just the cases in which he appeared. For one who had achieved so much, he remained an engagingly modest man, never “pulling rank” or taking on “airs and graces”. He was a genuine father-figure and mentor in Chambers, ever humorous, radiating dynamism and a formidable energy, but always making himself available to help members of Chambers who were not as successful as he. He particularly enjoyed leading new and relatively junior members of Chambers, and they invariably found the experience of working with him invaluable. He embodied and exemplified all the virtues of the Bar as a profession: his integrity and example were nonpareil, his courtesy to fellow barristers even in the most hard fought of cases never wavered, while his cheerful temperament and the pleasure he took in his work were qualities few of us could hope to match.

Quotes from Messages of Condolence

He has left his invaluable footprints in the history of international criminal law.

He obtained magnificent results ….. definitely one of the top handful of criminal lawyers of his generation.

a work load which would have defeated many a man, Clive so clearly enjoyed – indeed revelled in – his work.

He has always been such a big part of my life corrupting me by taking me down the pub before I was 16 to tease dad [a judge] and encouraging me to reach for the stars, something both of you achieved. (JC)

a wonderful man: a titan at the bar

Clive was a true legend!

There are really no words

father-figure to me. He embodied the values which I hold dearest, and he epitomised everything that is good about our profession.

and I know Clive will live on in you.

every memory I have of Clive is a happy one. That says a lot about the man he was, kind, generous and always fun to be around.

For me, Clive's memorial is the ineffable body of case law that he left (only some of which you mentioned !) - if anyone can claim to be the father of modern extradition law, Clive can. His genius also lives on in the several generations of barristers whom he inspired and led. It was my great good fortune to have been one of them, and I will always be so grateful to him.

… the exceptional clarity of his legal thinking will live on in many law reports all round the English speaking world. He will be greatly missed