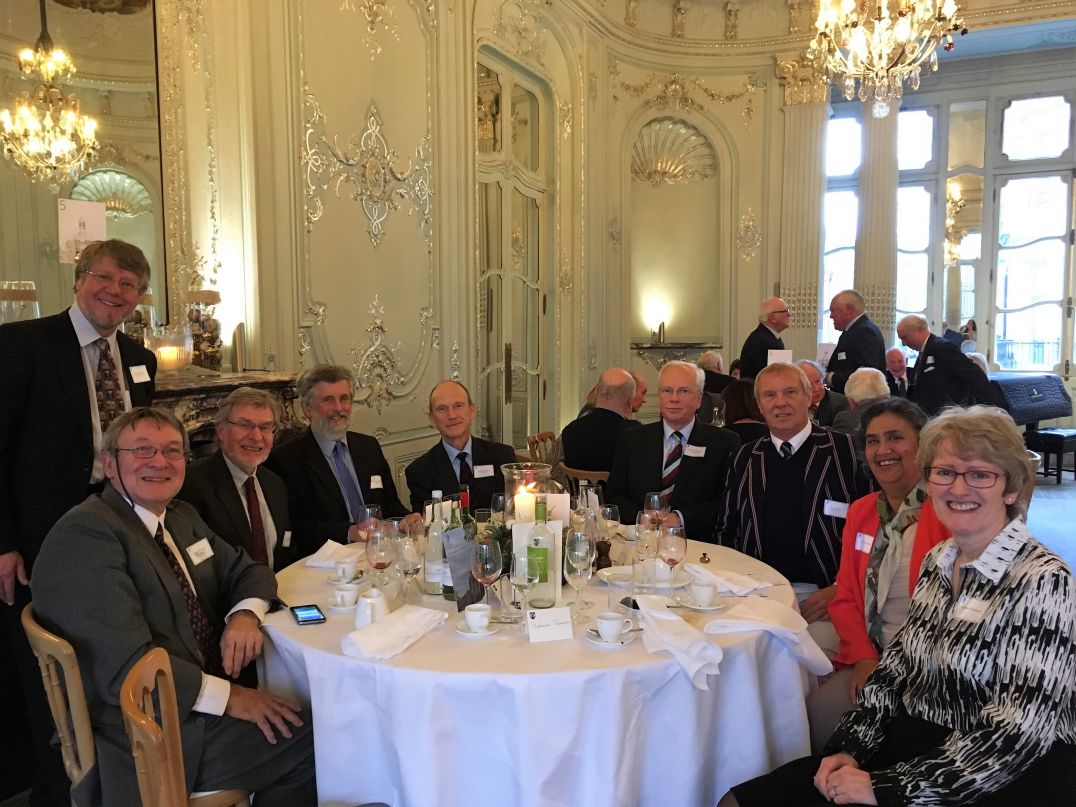 This year’s OB Pioneers London Luncheon was held in the newly restored Ballroom at the historical Savile Club in Mayfair, hosted by Gavin Henderson CBE (Le. 1960-65).

The Savile Club is a truly exceptional venue established in 1868 first under the name of the ‘New Club’ by a group of distinguished writers and artists of the time. It has since been frequented by writers such as Robert Stevenson, William Yeats, A.A. Milne, Rudyard Kipling, and the OB Pioneers! To read more about the fascinating history of the Club click here. Also lunching were Gavin’s sister Jackie Fitzgerald, their father ‘Jock’ having been for many years the Housemaster of Durnford House, and Piers, son of Peter Gough, Second Master from 1957 to 1964, who looked every inch his father’s son.

After the meal, Mervyn Dunhill (Br 1959-64), who was attending his first ever OB event, regaled the assembled company with his recollection of his friendship with Gavin, who he had not seen for 53 years, generated through their mutual passion for motor sport. Together they had organised two racing car shows, one in the Great Hall and one in the quadrangle by the then new science block. He recalled that Gavin’s trademark wearing of a bow tie arose from his hero of the day, Mike Hawthorn, Britain’s first F1 World Champion, who habitually wore one, even when racing.

Although Hawthorn had attended Ardingly College, he recalled three OBs who had made a name for themselves in the world of motor sport; these were the late Alan Mann (Le. 1950-53), successful team owner of the ’60s and builder of the Chitty Chitty Bang Bang cars for the film of that name, Jonathan Palmer (Al. 1969-74), F1 driver in the ’80s and motor sport entrepreneur, and the late Duncan Hamilton (no relation to Lewis) who won the Le Mans 24 Hour race in 1953. Most importantly, Mervyn expressed his amazement that Gavin could still recall the registration number of his mother Sybil's ‘mushy-pea green’ Ford Popular, often seen around the College, TPO 743.

Although Brighton has somewhat changed since our Pioneers attended the College some years ago, many things have stayed the same, and one of these, as Mervyn underlined, are the strong friendships and the sense of community formed at Brighton College. In his speech updating guests on news from the College, Adrian Ford also reflected on his role as Housemaster of Head's House:
"I think most sane people would find the prospect of living with 75 boys quite daunting but not only have they taught me a lot about what boys are capable of and how important having a strong community is, they have also been great older brothers for my daughter. As you are well aware it does have its challenges but I do not have my marketing hat on when I say they are a fantastic set of boys who are genuinely kind, well rounded and occasionally quite amusing."

If you have any questions regarding OB events, or would like to visit the College, please contact Veronika Neroj in the OB office at This email address is being protected from spambots. You need JavaScript enabled to view it. or by telephone on +44 0 1273 704 250.