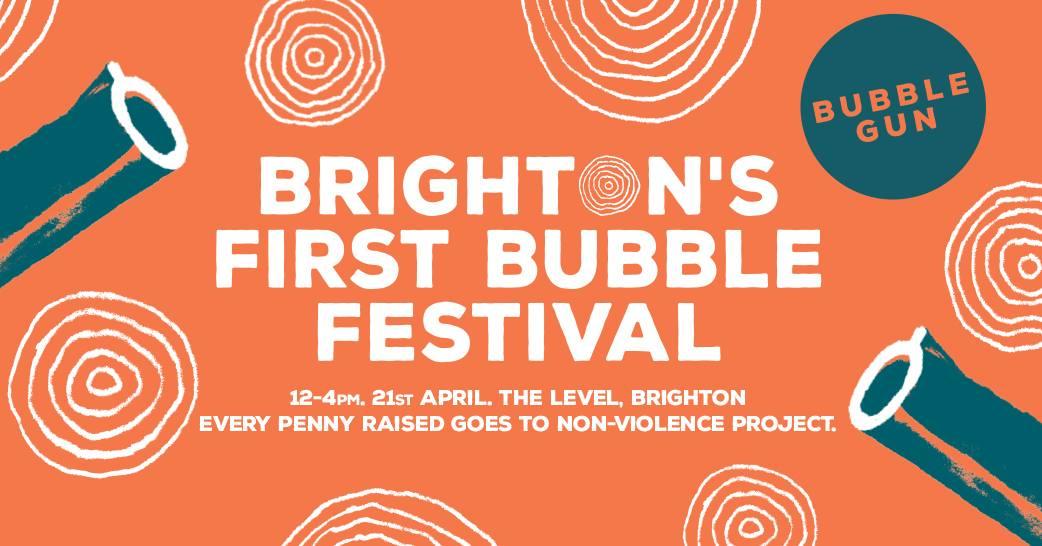 ‘What if all guns blew bubbles’ I said to myself as I fired my bubble gun into the sky one sunny May afternoon in 2016. As I gasped at the simplistic beauty of the idea, I knew that there was something special in there, a possibility. I made a promise that I would bring this possibility powerfully into the world.

A sky of fun, love and laughter

On Saturday 21st April 2018 the communities of Brighton and Hove will gather together at the Level in a show of unity and solidarity to create the possibility of peace by blowing bubbles, and creating a sky full of fun, love and laughter.

This event will be a beacon from which we will illuminate the issues that the world currently faces around violence and conflict, and create a space from which an alternative is possible. We are aiming to raise at least £20,000 and to have that money make a real difference, a tangible and direct impact upon our community.

We are working closely with the charity Non-Violence Projectwho specialise in running community projects to educate the children of today in peaceful conflict resolution. A wise man once said that the children are the future, and the Non-Violence Project really embody this message. They are currently in the process of launching an app that will enable young people to report bullying anonymously to their schools. The Annual Bullying Survey 2016 recently reported that 1.5 million young people have been bullied within the past year, and that of these people 145,800 were bullied everyday. This new app will be an invaluable tool in the task of tackling bullying which, at present, is an area that schools are struggling to deal with effectively.

The promise of Bubble Gun is that for every £10,000 raised, 5000 children in East Sussex will have access to this app for one year. This will have a massive and immediate impact on our community and we know that this will be just the start.

If we tackle bullying and create the possibility for peace with the young people of this world imagine how this might impact society as a whole as we move into the future.

We dare you to dream big and to join us in our stand for a future world in which all guns blow bubbles.