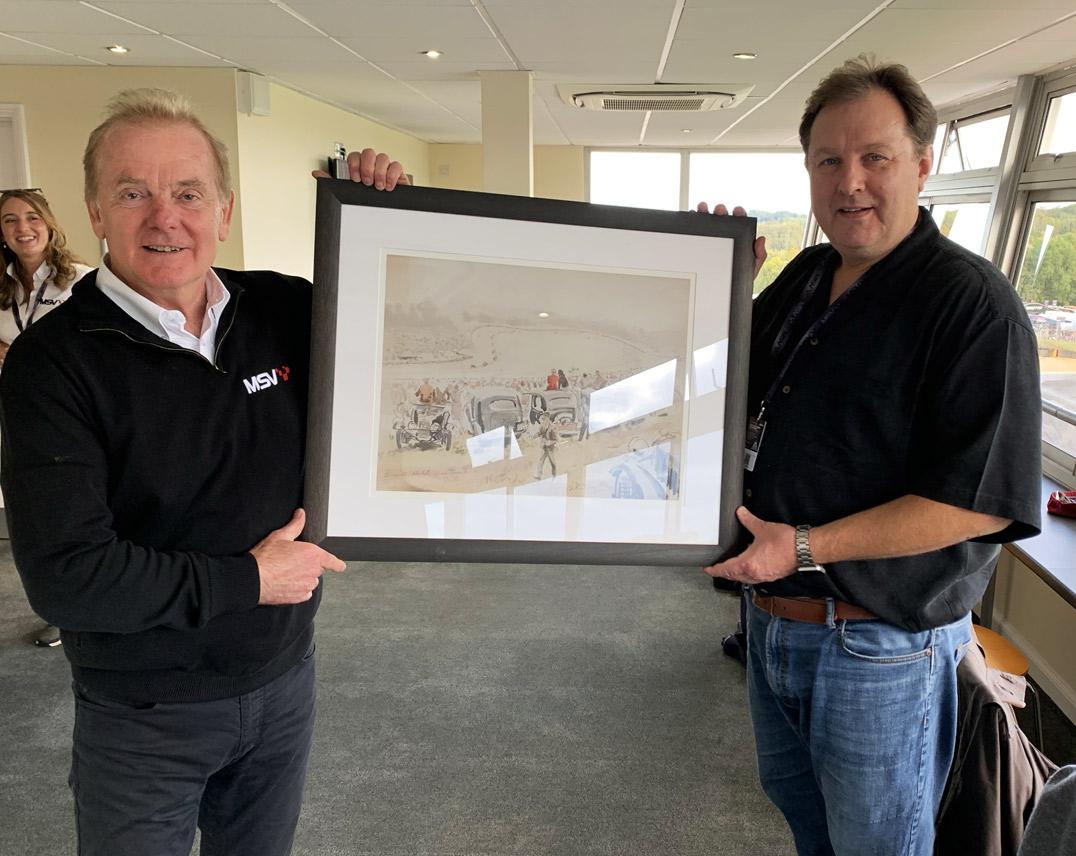 It was all about Old Brightonians at Brands Hatch on 24th October 2021, as a print of a remarkable watercolour painting returned home, 84 years after it was painted at the Kent racetrack.

In 1937 the acclaimed painter, illustrator, wartime sculptor of POW decoys - and Old Brightonian - John Worsley (Ch. 1932-35), sketched a watercolour of the Brands Hatch circuit from the banking alongside the home straight. Whilst never truly finished, the sketch shows the (then) grass track being navigated counterclockwise by motorcycles, portraying the distinctive Kent arena as the charming club circuit it then was.

Worsley sold the painting many years later to Brighton College’s then Director of Art, Nick Bremer (Common Room, 1969-00) and it's been hung proudly in the Bremer family home ever since.

More recently, the current owner of Brands Hatch - Old Brightonian Jonathan Palmer (Al. 1969-74) - became aware of the painting and declared that he must have it by fair means or foul, and so to allay any unseemly incident Nick and Alex Bremer (Ry. 1973-79) decided to produce a limited number of prints of the painting.

One print has already been gifted to the College itself, another hangs in Alex’s home in London (until such time as his father agrees to let him have the original!) and a third has now been gifted to Jonathan himself.

It seems absurd for Jonathan not to have a copy of this painting; its connections to him are simply too strong; quite aside from the fact that the painting is by a fellow alumnus and features his place of business, Jonathan also made his debut as a Grand Prix driver here - his bonds to “Brands” are profound.

Jonathan was delighted with his gift and enjoyed showing it off to his guests in his suite at Brands Hatch - a viewing suite that benefits from almost the same aspect as the painting itself. We’re told the print will hang in his office and it is wonderful to think that it’s finally “come home”.