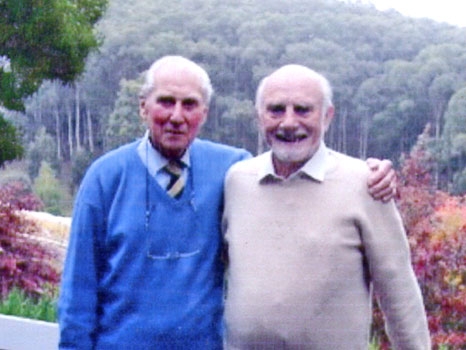 It was between 8 and 9 am on Thursday 16th April that I received a telephone call. A voice- unfamiliar - announced that he was speaking from Adelaide, South Australia.

He had just received the Pelican and had read the Obituary I had written for my twin brother Henry. Who was this? None other than Gordon Fenwick (W. & C. 1933-37). What a surprise and a real pleasure to receive sincere sympathy on learning of the death of my ‘other half’.

As it happened, I was able to say that in April ’06, I would be in Australia. Then, on Palm Sunday, Gordon got a surprise phone call from Melbourne. We just had to meet.

So, on Tuesday 18th April I flew to Adelaide for the day - an hour by air and seven hours by road! We met at the Airport 69 years since we were both at the College. Our paths had nearly crossed in 1944 when our respective units of the Gordon Highlanders were a few miles apart on the Irrawaddy River in Burma. Now, in April 2006, I walked up the Arrivals ramp and recognized the Gordon tie. It was Gordon and his wife, Julie.

Knowing our shared love of cricket, I was taken to the Adelaide Oval, of which he is a member. I saw the fine bronze of Sir Donald Bradman, then along a typical Australian avenue, straight and wide, bearing the great man’s name. It was a down town area which had recently been up-graded by the newly named avenue and the surprisingly humble Hilton Hotel (a pub) seemed to have found new life basking in the lime light of the Don’s name. Then the Childrens’ Hospital, The University, The Parliament Buildings, and finally the magnificent Freeway recently cut through the rocky approaches to the Mount Lofty Range, the highest peak being around 2,500ft. Their house, Cherry Cottage, is about 2,000 ft above sea level. Finally, we arrived at Aldgate. I felt quite at home knowing the East End of London well. At the entrance to their home of forty years were two notices ‘English Box Plants’ for sale - and they sell!

Incidentally, Gordon founded and took the first ever Australian Rotary cricket side to U.K. in 1944 and the first match of the tour was played at the College, thanks to the kindness of the then Headmaster, John Leach.

Over coffee and cake we relived the years from 1933 to today, touching down in Kent where Gordon farmed; Dunkirk, from which he escaped in a British destroyer. Then the Irrawaddy where his Regiment floated 53 Grant tanks across the river on rafts made of teak trees felled in the jungle. His meeting with Julie (from Adelaide) in England, and their landing in Australia in 1959. Then a memorable lunch in a fine pub, very English, liver and bacon and red wine. Back to his house for tea, by the log fire – it was autumn - school and house photos, the shared sadness of the deaths of some sixty of our contemporaries in the war. After photos, we were driven back to the Airport by his daughter Emma, visiting from Perth, so that we could go on talking. Next day my wife, Sally and I, flew for some 20 hours home to England. Such travel was not even thought of in those far off days.

Will we meet again? It IS a distinct possibility! All this was made possible by the thoughtfulness of Gordon Fenwick 69 years later. We are both in our 86th year, so anything is possible. To the New Boys: Keep going! You have been bonded by the College. Whom will you meet somewhere in the world in 2075?

I have to say that I don’t think I could tackle Mandarin, but top marks to the Headmaster for introducing it!