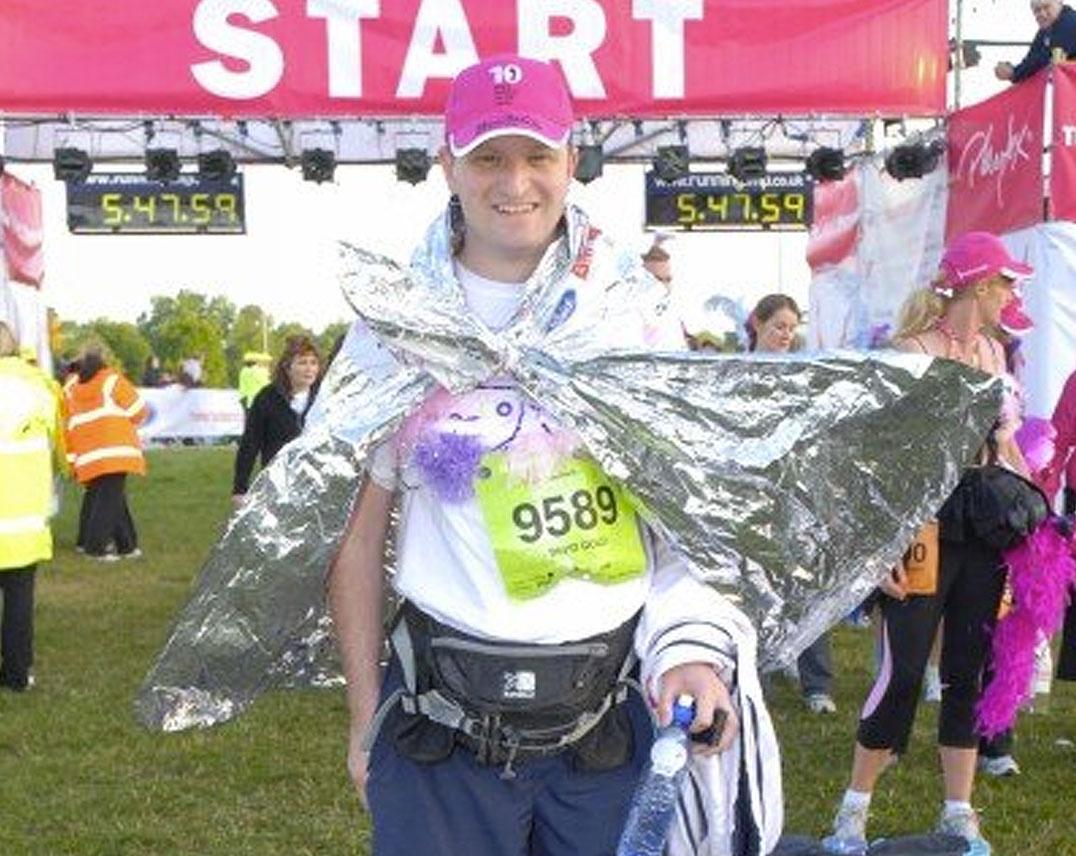 A huge "THANK YOU" to all Old Brightonians, friends and family who sponsored me in the Moonwalk on 21 May. The total raised has passed £1,000 and monies are still arriving. Anyone who wishes to contribute can still do so either on-line or by sending cheques to the OBA office payable to "Walk the Walk Worldwide".

Since my mother died as a result of breast cancer in 2005, I have been keen to help raise funds for cancer research. All my life I've been as generous as I can be when approached by people running marathons, swimming oceans, climbing mountains and jumping off buildings with a parachute and a prayer, but I've always been an observer, never a participant. Me and exercise just don't go as anyone who knows me well will confirm. So when I heard about the Moonwalk I was attracted to the idea. Okay, so it's a marathon (26.2 miles) but it's a powerwalk, not a run and the fact that it takes place through the night and everyone has to wear a bra externally didn't bother me. At the time I applied...

So there I was with my partner, Mark, decked out in my Playtex bra and pink baseball cap surrounded by 14,000 women and 1,000 guys in similar kit, in the magnificent pink tent in Hyde Park on a cold evening in May. That in itself was quite a sight! Many of the walkers had followed the advice to write their names in big letters across their chests so that spectators could shout encouragement, and many more had written the names of loved ones who had been affected by cancer - "In memory of Mum" or "I'm doing it for Susan".

We had our bum-bags full of high energy snacks, feet smothered in Vaseline and 2 pairs of anti-blister socks, and ate the meal of organic vegetable rice handed out by some of the 3,000 volunteers. As the time approached 10:30 Beverley Craven, herself a survivor of breast cancer, belted out one of her classic power ballads and the organisers came to the stage. And that's when it really struck home, as we were asked to join hands with one another and have a minute of silence as we remembered those who had died or continue to battle the disease. And then to turn to the person on our right and give them a hug. It may have been a very 'un-English' thing to do, but it united all 15,000 of us and the spontaneous applause which followed showed that. And so, at just before 11pm, our group headed for the starting line. Many of the bras were decorated so elaborately it was a joy to see. I truly believe more feathers, sequins and glitter were in that park than Liberace and Elton John could ever have wished for. And as we waited, we suddenly realised just what we'd let ourselves in for!

The first mile was easy, and the second, even the third and fourth. We were averaging 4 miles an hour for the first two hours and I will always wonder whether we might have maintained that pace if there hadn't been a flood near Tower Bridge which actually stopped the event for about half an hour.

The camaraderie was fantastic and even the drunks emerging from the bars and clubs in the early hours were supportive, though seeing thousands of women and men in their bras must have made them wonder just what they'd been drinking! Along the route bottles of water, oranges and bananas helped us keep spirits high, as did the many supporters lining the route. Fortunately the threatened rain held off. But treading the hard streets of London takes its toll, and for me it was as we hit the King's Road. Maybe it was not being able to actually do any shopping or maybe it was because it was daylight again, but everything suddenly started to ache. Mark's blisters were growing in all directions and we started to see ambulances stopping to collect people who could take no more. As much as you try to remember that whatever pain you're experiencing is only temporary, it is so tempting to stop...

We pushed on and passing the house boats at Chelsea Harbour for some reason it all got a bit emotional. Memories of mum in her final weeks were competing with the pain in my back, feet and legs and all I wanted was a hot cup of tea! By the time we reached Parliament Square it felt as though we must be close to the end and we found reserves of energy we didn't know we had. What fools! We forgot we still hadn't seen a marker for 23 miles, meaning it was far from over. Those final miles were sheer agony and to be honest I could have wished the supportive spectators lining the route a lot further.

Yet, as the pink Playtex tent came into view and the applause of the crowd grew, the feeling of achievement was overwhelming. At just after 8am we made it to the finish line, received our medals and promptly cancelled the brunch we'd planned in Soho! For all the pain, and the emotional rollercoaster, I will never forget that sense of achievement or satisfaction. What an experience.

Would I do it again? Without question. Will I train that little bit harder next year? A LOT harder!