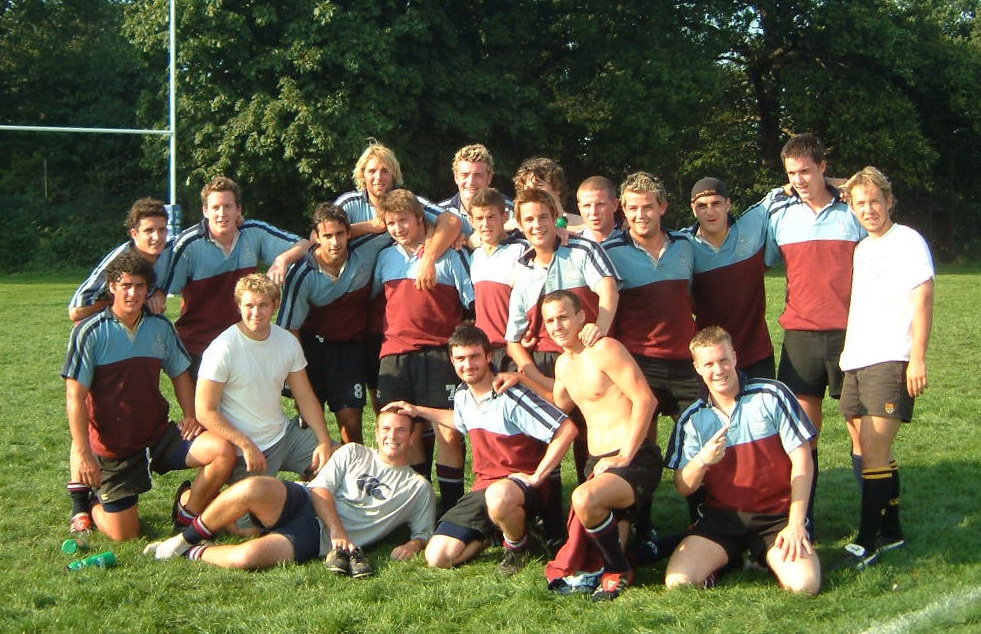 Gosh what a day! The first skirmisher car of the mighty OBs trundled through the wrought iron gates of the Richmond Athletic Ground to quite a magnificent sight. The time was around 10am, the air was already warm and clear, the September sun was scorching. Everywhere were half-dressed young men huddled in small groups, tossing balls around a select inner circle of public school chaps, eager to go to war with historical rivals. All the big names were there: Wellington, Millfield, Rugby, Abingdon (who incidentally have marvellous pink and white shirts), Marlborough, Bryanston, Radley, Harrow, Tonbridge and, of course, Brighton College.

Our main bus arrived shortly after I had registered our team over on Old Deer pitches; we were to play the little known St Benedict’s School from Ealing. After a really super pre-match warm up lead by none other than Daniel Heal (R. 1990-95), our animated, dedicated and ever so muscular coach, who, with expert discipline and supreme leadership, prepared this group of beautiful young men for war against the men of Ealing.

We took to the pitch champing at the bit; steam rose from Philip Ford (L. 1998-03) as he practised his very best war face. Adam Phillips (H. 1998-03) jaunted around like some dancing gazelle, with feet so fleet that not even the predatory cheetahs of Wellington, playing on the opposite pitch, could have caught this antelope. Owen Addison (A. 1998-00) elegantly patrolled his catchment area with the stocky James Canneaux (H. 1998-03), taut and ready for action. Alex Yeo (H. 1998-03), our Greek God in perfect symmetry and posture, knelt as if in prayer to Zeus himself, whilst Max Samandi (D. 1998-03) managed to kick himself in the head.

Alas, St Benedict’s called off and my wonderfully rousing pre-match speech was to no avail. And worse still we had Millfield in the second round, without having had a warm up game. Not that it damaged morale, as spirits were as high as ever when I led us onto one of the main display pitches to take on the goliaths that were Millfield.

A multitude of fans gathered and the far grandstand was a heaving mass of people. The last time we had met Millfield as a team we had beaten them and with this in our minds, the Pelican emblem of the College crisply on our chests and in our hearts, we charged headlong at the receiving Millfield team. CRASH, BANG, WALLOP! Jamie Aiken (A. 1998-03) fell over the drinks bottles in anticipation of the ball landing among the Millfield ranks. Phil Ford on the sidelines was so animated that he danced his most important war dance. The match, I was told, was the best of the day with hits being put in by the likes of Alex Yeo, Max Samandi and young Robert Heal (R. 1998-03). They were outstanding, as was the die hard attitude and immense physical sacrifice exuded by Kiwi, Chad Touro, who tackled at least four Millfield players at any one sitting, But despite strong forward dominance, the fleet Millfield backs managed to push around out Maginot line and dive into the corner. Sean Crowley, the Millfield full back and team mate to many of us ex-Harlequin boys, adroitly converted from the corner to take the score to 7-0. However, after a half time speech from the gaffer, Dan Heal, that would have raised any wounded soldier to carry on the fight to the death, we took to the field with renewed vigour. And after a good piece of quick possession from the forwards we whipped the ball out faster than Mr Withers could say “boom”. Thomas Howell (A. 2000-02), an Italian U19 and U21 international full back, rounded Crowley to slide the ball in over the astonished Millfield’s try line. Kit Barker (A. 1998-03) converted the try and the scores were level. Unfortunately, despite superb play on all fronts, in the scrum, the lineout and in the loose, we couldn’t break back into the game, even if the Brightonian’s pack did on numerous occasions shunt Millfield ten yards back and across their own line. Yet a speedy and superbly executed try by Millfield handed them back the lead and we were not able to answer this score despite camping on their line for the last five minutes. Final score: Millfield 14, Old Brightonians 7. Special mention has to go to Thomas Howell, Chad Touro, Rob Heal and Ian Tomlin (S. 1998-03) for superb individual efforts.

Yet that was not all, for the Old Brightonians were to be entered into the Shield competition, which consisted of teams such as Worth Abbey, Cardinal Vaughan, Christ’s Hospital and Radley.

After a brief rest and an exchange of banter we left our camp, which had now been encircled by Wellington and Harrow, and journeyed over to the far side pitches to dismantle Cardinal Vaughan. A salvo of seven of Her Majesty’s best tries rained in unanswered from the likes of Ian Tomlin, Sam Howse (A. 1997-02), Max Samandi, Adam Phillips, Chad Touro and Thomas Howell, with Kit Barker converting all but one. A massacre if ever I saw one! A gargantuan effort from a supreme old boy’s team. In this match, other than the outstanding running play from Adam Phillips, Ryan Smith (H. 2002-03) and Chad Touro who all took at least two tackles before being felled, forwards Phillip Ford, James Aiken and James Canneaux all had superb games in both the loose and the tight, whilst the combination of Max Oppenheimer (R. 1998-03), myself and Owen Addison in the line outs was tantalising.

Our next game would decide the Shield; it was against the old boys of Worth Abbey, who had already seen off the likes of Radley and Christ’s Hospital to get there. As usual, we started well but a lack of concentration allowed Worth to strike the first blow, however, we replied quickly through Adam Phillips and Kit Barker added the points. In the second half, with some sterling work from such players as Max Oppenheimer, Stuart Woodbridge (S. 1998-03), Nick Marshall (L. 1999-04) and Rob Heal, we upped the ante and ran in three more unanswered tries through the twinkle toes of Sam Howse, Ryan Smith’s bludgeoning runs in the centre and Max Samandi’s bear-like surges from number eight; Kit Barker adding four more points on top of this to signal a resounding victory. We capped the win off with some marvellous post-match celebrations and a super Cronk-Cunis U21’s Shield.

I would like to take this opportunity to thank all the players for their superb effort and commitment and their ability to reproduce the high quality of rugby that they played whilst at the College. Thanks also go to Peter Rumney (H. 1937-39), James Canneaux and especially to John Aiken (A. 1976-81) and Dan Heal, whose work and enthusiasm aided me greatly in arranging, transporting and training all the chaps who played in the tournament.

Many thanks chaps and here’s to next year!