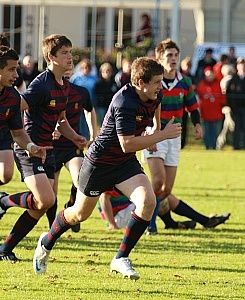 Brighton College played some delightful rugby this weekend en route to their first final in The Daily Mail Vase at Twickenham in the U15 Daily Mail Vase final on March 31.

Full back Jake Jones has somehow escaped the notice of the Sussex selectors this season despite scoring 20 tries and he showed what Brighton are about by coming into the line after five minutes to score No 21 under the posts after a clever set-up by centre Dominic Reid. St Columba's enjoyed some early joy with their pick and go and levelled the scores five minutes later when scrum half Tom Sparks caught Brighton napping from a quick tap penalty.

Not to be undone, Brighton pounced on a loose ball on halfway and winger Kiran Rajkumar made 30 metres before kicking past his opposite number. The try was on but he was impeded going for the touchdown and Brighton were awarded a penalty try. Scrum half Henry Anscombe, steady with the boot all day, made it 14-7.

Enter Jones again within three minutes. Rajkumar collected a clearance near halfway, threw a quick pass to the full back, and showing great pace, he arced around the St Columba's defence to score under the posts. Anscombe added the points again.

To complete a burst of scoring before half time, St Columba's worked the ball through their forwards again and No 8 Will Down touched down giving skipper Robbie Goddard a simple conversion. When their rolling maul produced another try for Down and a Goddard conversion, which levelled the scores at 21-21 four minutes after the break, the game seemed anyone's.

But St Columba's were never dominant again in the vital areas, largely due to some astute kicking from Brighton and their superbly fit forwards frustrating a bigger pack.

Anscombe edged Brighton in front with a penalty and their backs continued to probe for an opening. It duly came in the last minute when Anscombe darted through from 25 metres, was stopped short under the posts but flanker Dougie Glynn-Jones picked up from ensuing ruck to plunge over the line. Anscombe kicked his fourth conversion to put the cherry on the icing.