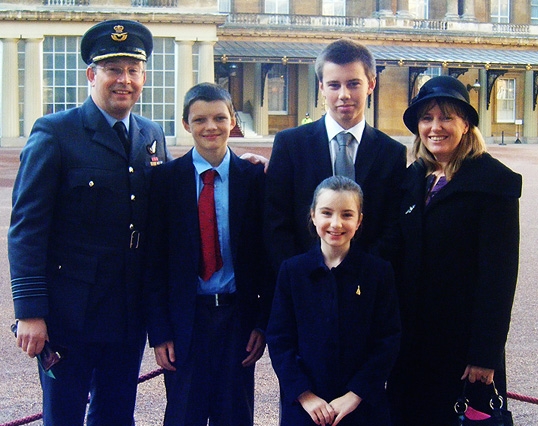 Having recently had dinner with a number of Old Brightonians in January, I was lambasted for not letting you know that I was presented with an OBE by the Queen on 30 November 2011.  The award was announced in the Queen’s Birthday Honours List on 11 June 2011.  Also in attendance on 30 Nov were Brian Ferry and Mark Cavendish and it appears they received more publicity than me!

I have not seen my OBE citation but the following extract is taken directly from a letter sent to me by Air Chief Marshal Sir Stephen Dalton, the Chief of the Air Staff:
‘The award justifiably recognises not only your outstanding leadership, commitment and care of your people throughout your tenure as Officer Commanding IX(Bomber) Squadron but also and especially during the many Operational deployments.  Central to the Squadron’s preparation and success during the Operational deployments, was your example and determination to set the bar for operational delivery and the continued development of personnel at an achievable yet demanding height.  Your identification of the need for joint planning during Operation MOSHTARAK in March 2010 was key to the success of the Operation and was undoubtedly central to operational delivery with no UK casualties and all objectives achieved.  Moreover, your outstanding dedication, inspirational verve and passion for improvement both in the work environment and in the wider local community is an example to us all.’

I was fortunate enough to command IX(B) Squadron, a Tornado GR4 Squadron, between Oct 08 and Nov 10.  During this period, the Squadron deployed for over 6 months on air operations over both Iraq and Afghanistan.  We also deployed twice to Germany (5 weeks) and once to the US (4 weeks) to execute essential pre-deployment training – the latter deployment to Germany was in our role as the lead RAF Suppression of Enemy Air Defences Squadron where we operated alongside Polish, Turkish and German Squadrons against realistic threats in Southern Germany.

Although the Chief of the Air Staff refers to ‘no UK casualties’ during Op MOSHTARAK, this was during the period of the infil and not the ensuing weeks and months when multinational and Afghan forces continued their endeavours to bring security to the area. Unfortunately, lives were lost as the Operation ensued.

Throughout my tour in command, the dedication of the men and women of IX(B) Squadron was awe-inspiring and the OBE is a reflection of their endeavours, often in a very hostile environment.  The families were also unbelievably supportive as we ask a lot of our military personnel (in fact, IX(B) Squadron was the first to deploy in support of the recent Libyan operation).  Even our return from Afghanistan post 3.5 months in theatre was eventful as we were stuck in Cyprus during the period of the Volcanic Ash cloud.  For the majority of us, the route home was a flight to Northern Spain, followed by a 5-hr coach trip to the port of Santander, a few hours sleep on the cobbles in an old storage shed and then an overseas trip to Portsmouth courtesy of HMS ALBION.  The subsequent 4-hr trip to Norfolk by coach was subsequently a doddle but it was great to be home!  After arriving home at 1am, we were then overwhelmed by the support of the local community as over 3000 people supported our homecoming in the town of Downham Market the following day.

The Tornado Squadron in Afghanistan is using new techniques to provide crucial on-the-ground intelligence, from the air. The project - focusing on improvised explosive devices - needs a specialised team of 130 people, and 9 aircraft, working out of Kandahar Airbase. Wing Commander of the RAF's 9 Bomber Squadron, Nick Hay, shows Caroline Wyatt how a new 'Litening pod' is helping them see things more clearly.

A few of the Squadron are shown on the deck of HMS Albion waving the green and yellow flag!