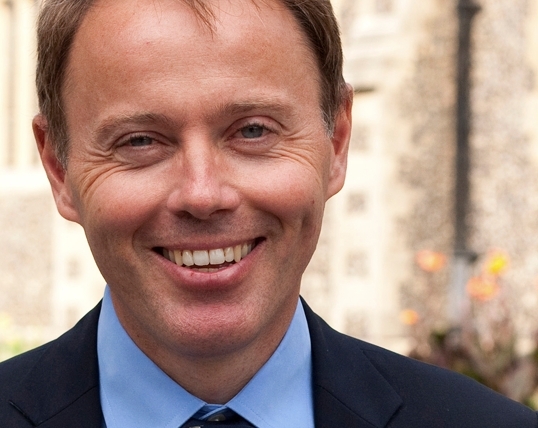 End of Michaelmas term 2016 letter from The Head Master

This has been a year in which once again the focus has been on creating an environment where every child feels valued for who he or she is. That’s not always easy amidst the maelstrom of hormonal change that bedevils teenagers (and no doubt drives one or two parents to distraction).

But I think we succeed far more often than we fail. And I see this each day in the genuinely warm and supportive relations between pupils. Sometimes, we forget that this same focus on self-worth is also one of the key factors in pupils’ academic success. This is not very surprising. Young people who are happy in their own skins are always going to be more open to throwing themselves into their studies or indeed into their sport, music, drama and dance.

Looking back on my end of term letters of recent years, I am ashamed to say that I rarely ever mention academic success. It’s not been a conscious decision and probably just reflects the fact that the outcome (the results) interest me less than the creation of the culture that delivers those results: a focus on inspirational teaching, a belief that challenging pupils intellectually is preferable to stultifying them, and an understanding that only happy children, comfortable in their own skin, can ever really be the first class versions of themselves that we want them to be.

But I am going to mention two recent academic successes – mainly because our teachers are so proud of the pupils. I shall then revert to form, offering I hope something more reflective to consider over the holidays.

So, first up is the news from The Sunday Times, something I know that I’ve already written to you about, but good news is always worth repeating:

a) News from The Sunday Times

In the only analysis of schools’ results that includes GCSE and A-Levels (or equivalent), as well as any grade changes following the re-mark of exams, The Sunday Times has named Brighton College as the highest performing co-educational school in England.

This is based on:

And here is the second item of academic interest:

b) News from the OECD

You may well have read in recent newspapers how UK pupils performed, in recent tests conducted by the OECD, compared to pupils in other countries. For the first time ever, our own pupils took part in these Pisa tests so we are able to compare our cohort with the top performing countries in the world. The results are encouraging: 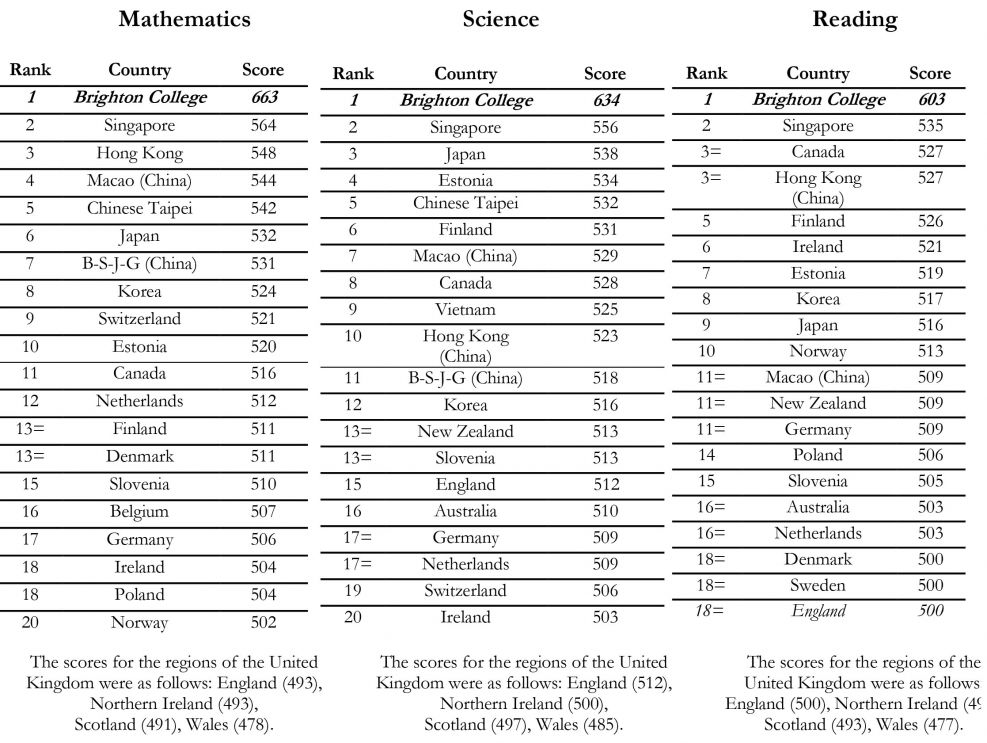 There is no doubt that both The Sunday Times’ story and the OECD results are immensely reassuring, demonstrating that our pupils are very well placed to compete in the future with youngsters across the globe.

But education must be about much more than that. Of course, outstanding exam results guarantee our sixth formers places at top universities and, of course, that matters. It also matters that they leave here for university ready and willing to engage intellectually with their courses, practised in putting in the necessary hours and focused on honing those particular skills that will stand them in good stead as they embark on their future careers.

But I hope that each one of our pupils recognises that his or her education is about so much more than that. And here I don’t mean the need to engage actively in sport, drama and so on, important though that is. Rather, I refer to how they can each use the education with which they have been blessed to make a meaningful difference to the world in which they live.

But before I explain what I mean by that, I want to take you back to June of this year and the opening of the new college war memorial, tucked away by the north door of the chapel. When you next visit I hope that you will make a point of having a look. You will see that, unusually, it is a statue not of a soldier but of a schoolboy. Why? Because for the most part, those hundreds of boys and men who left the college for war were not soldiers, sailors or airmen. They were boys and men who, at another time in another place, would not have had to face the terrible responsibility of the battlefield, thrown unexpectedly into an arena where they were trained to kill fellow human beings – or be killed.

The message at the base of the memorial reads: He left this place never to Return. Be Grateful. I chose those last two words carefully because we should be grateful – grateful for what those young men did for us in defence of our freedom and way of life, grateful that we have not had to make the same terrible sacrifice, and grateful too that, unlike that boy depicted on the memorial statue, we live in this place at this time. In a Britain that is fairer, freer, healthier, wealthier and still more tolerant than it has ever been. And in a Western Europe which has experienced peace for over 70 years, longer than at any time in the history of this continent.

How lucky we are by comparison. And how unlucky were the mothers and fathers of those sent off to fight and die in 1914 and again in 1939. I can’t get out of my mind a description of that day in November 1918 when the war finally came to an end. As the church bells of Shrewsbury rang news of peace, Susan and Tom Owen knelt in their kitchen and gave thanks that their three sons who had gone to war had been spared. Then came a knock on the door. A young boy stood patiently outside, a telegram in his hand. Their eldest boy, Wilfred Owen, was dead.

And the grief of a generation lasted long after that day. On the 1st November 1920, the widows of those whose husbands had no grave were invited to the first ever ceremony at the new Cenotaph. The mothers came with their children. They told their sons and daughters that this was Daddy’s grave. And so, winding their way down Whitehall, women and children queued to lay their flowers at the foot of the Cenotaph. In one heart-breaking moment, a little boy bent to lay his posy among the mass of flowers, and was heard to say: ‘Mummy, what a lovely garden Daddy has’.

Closer to home, there is a stained glass window depicting three saints above which hovers a pelican, the symbol of sacrifice and of Brighton College. It is in our chapel, and it is dedicated to a young private in the Medical Corps, Kenneth Charles Goodyear, killed while stretcher-bearing a wounded man out of No Man’s Land. He won no medals, he achieved no rank but to his parents he was everything. Their only child. And this window is their farewell.

And I mention the Owens, that little boy at the Cenotaph and the grieving parents of Kenneth Goodyear, because I know that they would want to believe that somehow their suffering was worth it. That out of their grief came something good.

And personally I think that we have a responsibility to respond to the earnest hopes of that long gone generation. Otherwise, what is the point in remembrance at all?

And that brings me back to today, to our responsibility to use our education to make the increasingly uncertain world in which we live a better place.

On one level, we are already doing that. Not a day goes by when I am not accosted by the sellers of brownies, cakes and other treats, all designed to raise money for charity. Last year, pupils raised a quite astonishing £55,000 and I see every indication that the sum will be higher in 2017. But we need to encourage the boys and girls (and ourselves) to move from actively caring about an issue to directly engaging with it. And that has begun to happen: pupils who care about the plight of Syrian refugees are now actively teaching them English on Sundays, and a group of sixth form pupils who care about the homeless are actively working at a soup kitchen at the weekend. But I would like every pupil to care and to engage, and this really is the focus of my letter.

On the last day of term, all pupils received a message from me, listing some issues they may want to think and care about. The list is certainly not exhaustive, but I hope that it will spark discussion at home that will lead to a desire for greater engagement with any issue that they care about. I hope too that older pupils will consider joining a political party. I have no doubt that British politics will be a better place for our pupils’ engagement. And there can be few times in recent history when common sense in politics has more urgently been required.

And next term, we will ask each pupil to tell us how they have responded to this challenge, we will put them in touch with other pupils with similar interests and we will nudge the uninterested into some form of meaningful engagement.

So, that is my challenge. I hope that that we can engage all of our boys and girls in something that really matters. If, as Old Brightonians, you also decide to take up the challenge, I hope that in doing so, we can do our bit as a community to make this uncertain world a little kinder. I feel sure too that the young medic Kenneth would have approved, and that his parents, whose own and only child was taken from them so young, would take comfort in seeing our boys and girls doing the right thing, creating a better society that their son had been promised but tragically never experienced.