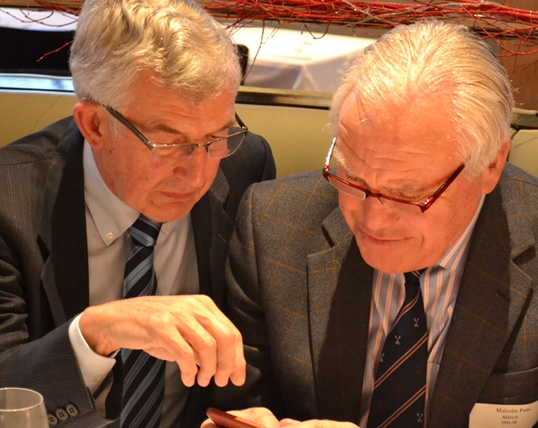 Le Café Anglais proved a spectacular setting for the Pioneers Club London Luncheon where Old Brightonians gathered together on Thursday 8th December. Friends were reunited for our gathering, and many a peel of laughter was to be heard over the wonderful array of photographs brought in.

Particular thanks should go to John Flood (S. 1950-1954) who brought in whole school photographs which were very much enjoyed by all. Thanks should also go to Neville Abraham (B. 1950-1955) who generously hosted the event in the restaurant, and bought a round of drinks for our Old Brightonians upon their arrival. He spoke most eloquently about how the College continues to go from strength to strength not only in size and number but also in the good grades achieved. The time spent over lunch with old friends was truly enjoyed by all, mobile phone numbers swapped and many promises made to reunite again.

"As to a message for the Pioneers Club London Luncheon, all warm good wishes to the lunch party, and great regrets to miss such a generous occasion - it's getting late in the day to have to miss such an occasion, so I hope the Iraq Inquiry can finish in time for any repeat event; and a very merry Christmas and a happy New Year to all of us, in such a wonderful year for Brighton College."
Sir John Chilcot (H/S. 1952-57)

Future Dates:
The Pioneers Club also has the following dates in the diary:
Tuesday 21st February Sandhurst Tour & Luncheon
1030 hrs at Sandhurst for tea/coffee followed by a tour by Peter Miller (C. 1945-49) and a light luncheon in the College. The cost is £25 per head. Cheques should be made payable to Brighton College and sent to the OB Office (Brighton College, Eastern Road, Brighton BN2 0AL)
Saturday 14th April Sussex Downs Walk and Luncheon at The Tollgate Pub
Thursday 10th May Brighton College Tour & Luncheon
Friday 10th August Gravetye Manor Garden Tour & Afternoon Tea

To reserve a place at any of these events please email This email address is being protected from spambots. You need JavaScript enabled to view it. or telephone 01273 704 250.