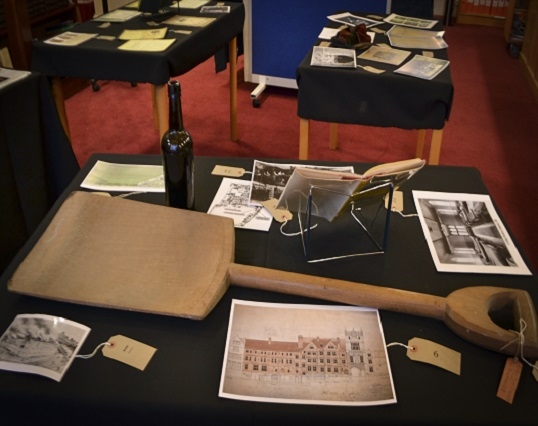 History Challenge Week: A History of Brighton College in 50 Objects

As part of History challenge week, a fascinating exhibition entitled ‘the History of Brighton College in 50 Objects’ has been displayed in the library. Based on the popular BBC series, ‘A History of the World in 100 Objects’ presented by the Director of the British Museum, Neil MacGregor, the exhibition provided an intriguing insight, not only into the history of the College, but also into the wider context of social and political changes that have taken place between the mid-19th Century and the present day.

Perhaps the most poignant exhibit on display was the Brighton College war record, which detailed the school lives and war careers of all the Old-Brightonians who bravely and with no question gave all that they had in the service of humanity. It is fitting that the college is able to commemorate their sacrifice and valour in a manner that acknowledges each one of them as an individual, serving to illustrate the diverse range of talent and potential that was so cruelly taken.

The exhibition gave a fascinating insight into the lives of those who attended the college before us, and no object serves as a better illustration of how the College’s values have changed than the undated cane which is believed to have belonged to one of the boarding masters of the early twentieth century. The cane serves as reminder that not that long ago the means by which the College operated was massively contrasted to how it is now. Draconian perspectives on discipline and punishment would have been part of day to day life at Brighton College and corporal punishment would have been seen as the norm.

From a historical perspective, perhaps one of the most fascinating objects on display was an account of the productivity of the Brighton College Munition Making factory. Between 1942 and 1945, the factory, which was established on the College grounds, produced a total of 172,669 armaments and the account provides an enthralling insight into the mobilisation of the Home Front, throughout the Second World War.

Leaping ahead 30 years, another object of particular note was the Fenwick House Photograph of 1975. With the College becoming co-educational in 1973, the girls in this photograph would have been some of the very first to attend Brighton College, and the decision to bring about the introduction of girls must have led to a fundamental transformation of College life. This was arguably one of the most significant events in the history of the school, especially since the College continues to be a leading advocate of mixed-sex education to this day.

Another defining moment in the history of the College was the arrival of Head Master, Richard Cairns, in 2006 and with this in mind, the exhibition also featured the first article written by the Head Master in the Brighton College Magazine. Mr. Cairns made national headlines in his first weeks as Head Master, with his decision to introduce compulsory Mandarin classes for all Fourth Form students, and since then, under his leadership, the College has risen from 147th in the national league tables to become the highest ranked co-educational independent school in the country in 2014.

Last but by no means least, the final object on display served to be perfectly summarise the progression of the College, a newspaper article from the BBC, bearing the headline: “Brighton College scraps uniform code for transgender pupils”. This decision, made at the beginning of this term, highlights the College’s continued commitment to the fundamental values of diversity and equality and has seen Brighton College hailed as one of the most progressive public schools in the country. In recent years, the College has addressed a number of prominent social issues, including homophobia, bullying and intolerance, and has always advocated a policy of acceptance and support for all of those in the school community.

The exhibition proved to be a great success, and special thanks should be given to all those members of the History Department, Library and College Archives, for putting on such a fantastic display. For all of those with an interest in History, the progression of the College from a Victorian boys boarding school, governed by the draconian laws of the period, to a co-educational day and boarding school, which promotes modern values of acceptance and diversity, has been an incredible one and which, no doubt, will continue well into the future.

This week's blog post was kindly written by pupils in the lower sixth - Joshua Cowland and Edward Warren.