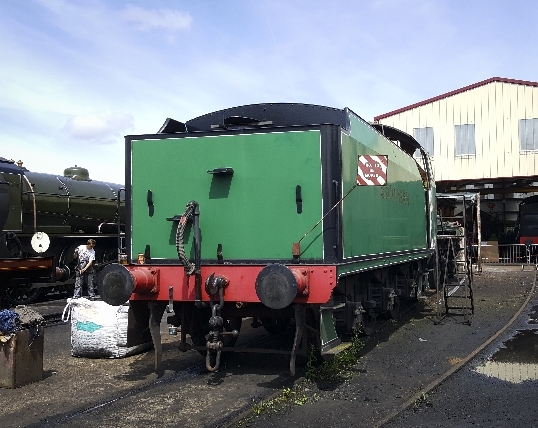 Stories from the Archive: The Brighton College Locomotive

About six months ago, our maintenance team asked me to take a look at a large sign stored in their workshop.

I popped down to investigate and discovered a name plate from the Brighton College steam locomotive, part of the SR V class, more commonly known as the Schools Class.

I asked colleagues what they knew about the name plate, and found a few notes in the Martin Jones history of the school. Shortly afterwards, by great coincidence, Julian Bridle, an OB, got in touch to enquire about this photo. In the same message, he informed me the plate had once been on display in Brighton College’s woodwork classroom. Julian also told me the Stowe locomotive, from the same class, was currently being restored at the Bluebell Railway. He kindly put me in touch with the knowledgeable David Jones from the Maunsell Locomotive Society, and we organised a visit. It seemed I was destined to learn more about this locomotive!

Designed by Richard Maunsell for the Southern Railway, 40 locomotives were made in the SR V class, and all were named after English public schools. Withdrawal of the class began in 1961, at which point a name plate was donated to every school – hence why we ended up with ours. But how did locomotive 928, the Stowe locomotive, find its way to the Bluebell Railway? David explained it was originally acquired by Lord Montagu of Beaulieu for display at what is now the National Motor Museum. It remained there until 1972, when it moved to East Somerset Railway, and then finally arrived the Bluebell Railway in 1980, where it was put into running order. After its ten-year service period, the locomotive was left untouched and by the year 2000 was in need of an overhaul. The Maunsell Locomotive Society stepped in at this point. The poor condition of the locomotive’s tender and boiler meant this overhaul would be lengthy and expensive, and is still a work-in-progress – as the gallery of images shows.

Prior to my visit to the Bluebell Railway, I had no idea of the time, effort and resources required to restore a locomotive. The dedication of the Maunsell Locomotive Society is inspiring. I plan to keep in touch with their team, and hope to visit when the restoration is complete, perhaps with our name plate and a group of pupils…

Does anyone remember the Brighton College locomotive, and were any of you lucky enough to travel on board? We’d love to hear your stories.