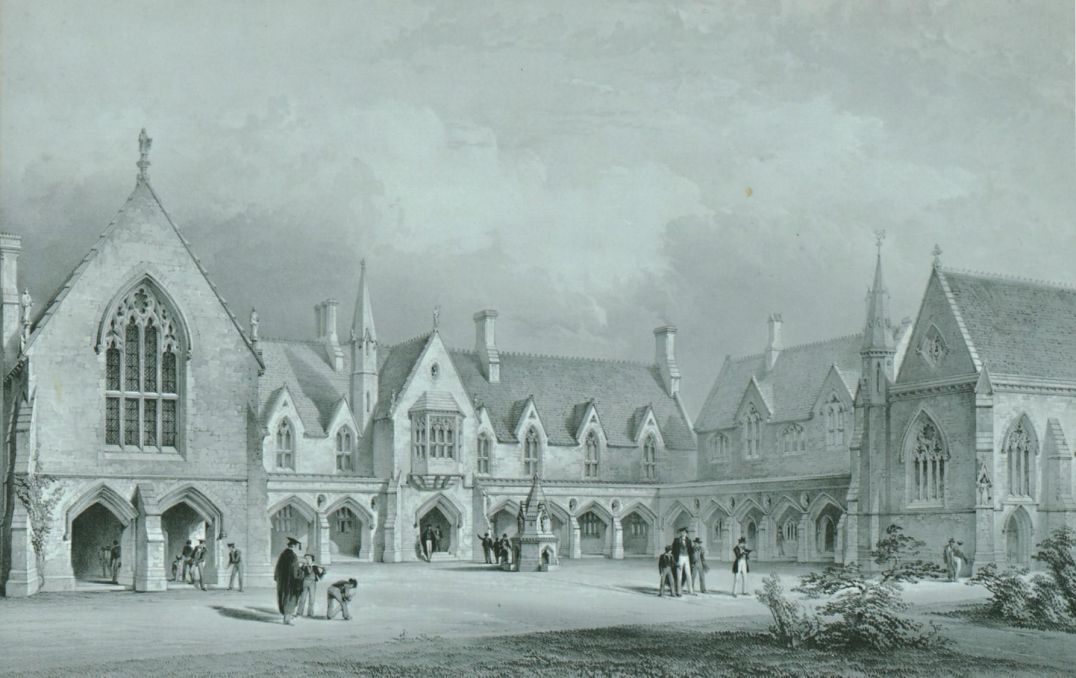 Happy Birthday, Brighton College! The 24th November is our birthday, and our Archivist, James Harrison explains what happened in 1845...

1845: Oscar Wilde, Conan Doyle and Rudyard Kipling were yet to be born, Queen Victoria and Prince Albert had only been married 5 years, the transportation of convicts to Australia had only just ceased, it would be another 25 years before any form of compulsory education was introduced, another 8 before the Crimean War began, and Sir Robert Peel was in Downing Street, attempting to grapple with the first year of the Irish Potato Famine. This was the year Brighton College was born.

William Aldwin Soames was a highly educated man who had been a scholarship boy at Trinity College, Cambridge. His family had made a great deal of money, initially through the manufacture of candles and then, when the arrival of electric lighting forced diversification, through property. As a result of this success, Soames owned a large amount of land in Brighton. In 1845, Soames decided, alongside a group of local philanthropists, to found a school.

However, bringing this school to life would take time, and the involvement of an array of prominent individuals. Other men important in the initial conception and organising of the planned school included Edward Cornford, a local solicitor; the Rev. Henry Vane Elliott, a nationally renowned evangelical divine; and members of the local gentry and aristocracy, including Sir Thomas Blomefield, a baronet, and Lord Alfred Hervey, one of the town’s two MPs. But while many of these men would step back after the initial foundation, Soames would continue to serve the College in different capacities for over 20 years. Soames’ enthusiasm helped to create the school, and his energy and riches helped to sustain it in its infant years.

According to G.P. Burstow and M.B. Whittaker, writer’s of the College’s first history, the 27th October 1845 was believed to be the first date in Brighton College’s history. On this date, a Preliminary Meeting was held at the National School Rooms, comprising of Gentlemen favourable to the project for creating a new school.

However, Burstow’s research in the 1950s uncovered an even earlier date, 7th July 1845, as the first in the history of the College. On this date a private meeting was held at the National School Rooms, on Church Street. This meeting, attended by many of the College’s founders (including Soames), deemed it desirable and practicable to establish a College at Brighton on Church of England principles for the education of the sons of noblemen and gentlemen. This meeting discussed some of the details of the school, such as the site, and the nature of education. It was also decided to arrange for the General Meeting that eventually took place in October.

Sadly, we know very little of a series of meetings that took place between June and October 1845, though we do know that these took place. Following the apparent success of this July meeting, a note, dated 6th October 1945 gave notice of a preliminary meeting, to be held in the National School Rooms on the 27th October, of Gentlemen favourable to the project. This initial invitation went out to more than 100 members of the local gentry.

During the 27th October meeting, it was unanimously resolved that a proprietary school should be established at Brighton, and some initial decisions were made as to the subjects that should be taught, and that the school will be divided into two departments – the Senior and the Junior. It was also resolved that a Provisional Committee be appointed to submit a scheme for how this new school will take shape.

It was also agreed that Queen Victoria would be humbly requested to become the patron of this proposed school, though she refused, fearing a deluge of similar requests from other schools, while perhaps also driven by her growing disdain for the city and the exposed Royal Pavilion, which she would soon sell.

Sadly, the National School Rooms, which played such an important role in the birth of Brighton College, have not survived the last 175 years of change. The National School, a superb and rare example of Regency Gothic architecture, was demolished in 1971, when a postal strike delayed the delivery to Brighton Council of a Grade II listing document.

Once the work of this Provisional Committee neared fruition, a second notice was sent out on the 18th November, announcing that a 'Meeting of Gentlemen favourable to the Establishing of a proprietary School at Brighton’ was to be held at the Town Hall, Brighton, on the 24th November. This meeting was to receive the report from the Provisional Committee. The stage was now set for the foundation of Brighton College.